The Politics Behind the Bazaar Demonstrations

The demonstrations that erupted on Oct. 2 in front of the Tehran bazaar were in reaction to the growing economic crisis and continued currency plunge in Iran (the rial has lost more than two-thirds of its value in the past year). They also reflect the deep political crisis and the associated tensions that are escalating among the ruling clique.

Those in power in the Islamic Republic of Iran, calling themselves “Principlists,” belong to the same hardline clerical-military-industrial oligarchy. However, after eliminating the so-called “reformists” of the regime, they have now split into several factions: the “traditional Principlists” are mostly Friday prayer imams and have strong links with the merchants of the mighty bazaar; the “United Front of the Principlists” is powerful in the Islamic Majlis (parliament); and the “Paydari Front” controls the presidency and the government.

The Principlists have also formed multiple parallel states within the state. The Office of the Supreme Leader, while formally in charge of the armed forces, national security, foreign policy, and state media, has parallel organizations with almost all ministries. The Islamic Revolutionary Guard Corps (Pasdaran) has its own security and intelligence establishments and strong influence in the regular armed forces, and is involved in all branches of the economy, even controlling the national telecommunication infrastructure. Finally, there is the government headed by the president with its own ministries and agencies.

The economy is essentially controlled by four sectors: the traditional public sector, including oil export, run by the government; the Pasdaran sector, which runs the large military and non-military industries, businesses in oil and gas, agribusinesses, and real-estate developments; the Bonyad (religious foundations) sector, which controls more than 20 per cent of the Iranian economy, consisting of different industries and businesses confiscated during the revolutionary period, as well as various religious endowments; and the “private” sector, consisting mostly of former nationalized industries and businesses sold below market prices or handed to cronies of the regime and family members of the clerics and Islamic guards, as well as a contingent of non-affiliated private businesses, which survive through bribes.

During the botched presidential elections in 2009, the Principlists were all united in supporting and installing Mahmoud Ahmadinejad against Mir-Hossein Mousavi and Mehdi Karroubi (both of whom were elements of the regime, but were demanding some reforms, and now live under house arrest). With the upcoming presidential elections in June 2013, all factions of the Principlists are mobilizing their supporters. The infighting is now reaching its peak. Iran’s vast secular elements were never part of the electoral game in the first place, but even the Islamist reformers have been completely pushed out of the race.

Currently, the main rift is between Ahmadinejad’s Paydari Front and a tenuous alliance of the other Principlist cliques. In his second term of presidency, Ahmadinejad tried to show some independence from the Supreme Leader by pushing his own populist policies. There were even several instances of open confrontations. His two-term presidency coincided with increased oil revenues, estimated at more than $500 billion, a figure larger than the combined oil revenues of the previous 16 years under previous presidents Akbar Hashemi Rafsanjani and Mohammad Khatami. Ahmadinejad went from province to province funding small populist projects, while at the same time cancelling many long-term infrastructural development projects. In recent years, he tried to give a different image of himself both in his attire, wearing formal dress on many occasions, and in politics, emphasizing the past glories of Persian culture. He continued with his notorious anti-Israeli remarks and used them whenever he was faced with internal problems and needed to divert attention from any issues. Ironically, his Israeli right-wing counterparts also used his remarks, presenting Iran as the eminent danger to Israel, diverting attention from the Palestinian issues, and mobilizing pro-Israeli right-wing politicians.

The successive sets of sanctions in response to Iran’s controversial nuclear program have created serious problems for the people of Iran, who face hyperinflation, unemployment, and food and drug shortages. The regime that claimed to be the “government of the dispossessed” has drastically widened the gap between the rich and the poor. The replacement of the subsidies with cash has been a disaster, and a new “master/apprentice” provision has been added to the regime’s already draconian labour law, allowing people to keep workers for up to two years without paying them – and those workers do not have any social safety net coverage. Many industries take advantage of this, as they are not capable of paying the wages and salaries, and there is no trade union organization to defend the workers.

The sanctions have also created problems for Ahmadinejad’s government. Although foreign-exchange reserves remain large and there is a very low level of public debt, since the more recent sanctions targeting the oil industry and the financial system, the government has lost more than half of its oil revenues, and cannot even transfer the earned revenues outside Iran.

While attending the UN General Assembly in New York last month, Ahmadinejad heard that the Iranian judiciary had detained his top press adviser. This action was obviously intended to humiliate Ahmadinejad, who had crossed the line and suggested that Iran was ready to negotiate with the Americans, a policy abhorred by the Supreme Leader and other Principlists. Upon his return to Iran, Ahmadinejad called a press conference in which he openly criticized his rivals. This contributed to the further plunge of the rial.

What is unique about the recent demonstrations is that they are related to economic issues involving Islamist capitalists and merchants of the bazaar. The Iranian bazaar has been the economic backbone of the Islamic establishment from inception. One of the individuals supporting the demonstrations was Habibollah Asgaroladi, who is the most influential leader of the bazaar, head of the fundamentalist group Motalefeh, a leading figure of the traditional Principlists, and a remnant of a major Islamist terrorist group in Iran in the 1950s that had close associations with Ayatollah Khomeini. The disgruntled bazaar is particularly alarming for the regime. Also, most industries that are dependent on imported parts and material are at a standstill, and the construction sector is almost halted.

The Principlists want to blame Ahmadinejad for the mess, and some are trying to force him to resign – something this brazen man will never do. Some hope that the present parliament, which was handpicked by the Principlists, will give him a vote of non-confidence. But Ahmadinejad is said to have secret files on all the major figures, à la J. Edgar Hoover, and has threatened to expose them if he is forced out of office. The Supreme Leader, who has the power to remove Ahmadinejad, is afraid that his expulsion may create more uncertainty, and prefers to allow his term to end in June 2013.

In the middle of all this, Akbar Hashemi Rafsanjani seems to be making a comeback. One of the founders of the Islamic regime, the post-Iran-Iraq war president, and a multi-millionaire businessman/cleric, Rafsanjani was previously pushed back by the Principlists, particularly Ahmadinejad, and is now seen by some in the regime to be the only establishment figure that can save it from the present abyss. Although he is not a reformer, Rafsanjani is a pragmatist mullah and is in favour of improved relations with the West. But he is a competitor to the Supreme Leader, Seyyed Ali Khamenei, who is sick and seems to be nearing his end. Many in Khamenei’s inner circle would like Rafsanjani to be eliminated from politics before Khamenei is gone.

Overall, it is the Iranian people who are suffering politically and economically. Sanctions are severely hurting the people. Intellectuals, labour leaders, feminists, and student leaders are being imprisoned, exiled, or silenced. The repressive apparatuses of the regime are so immense and powerful that the opposition currently has no chance of seriously challenging the regime.

Yet, the bigger fear for Iranians (both within the country and in the diaspora) is the looming war and threats of attacks by Israel and the U.S. The present Israeli leaders in the hawkish Benjamin Netanyahu-Avigdor Lieberman coalition government are well aware of what is going on in Iran. Yet, they aggrandize the “threat” of Iran for their own benefit and beat the war drums, wanting to drag the Americans into yet another disastrous war in the Middle East. The fact, however, is that if there is one thing that can save the present Islamist regime and bring together all the Principlists, fundamentalists, and Islamic guards, it is such a war. Although they know that this would devastate Iran, they believe they can survive as a regime. It is only the innocent Iranian people, who have been struggling for a secular democratic government, that will continue to suffer. 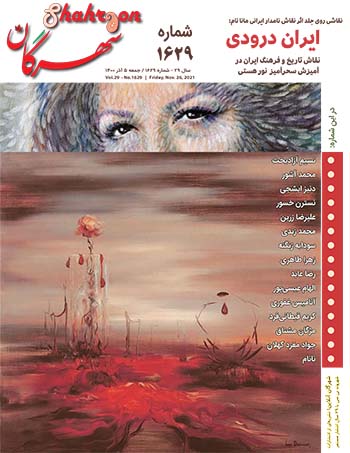